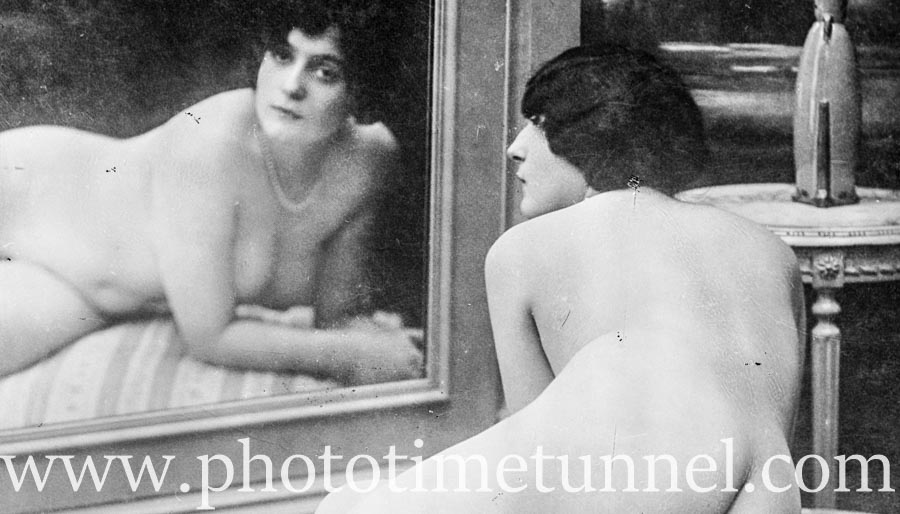 When people ask us how we got started on our career of book publishing I’m never sure whether to tell the truth. Because it all started with some boxes of glass plate negatives of naked women.

I’d been at an ephemera fair in Sydney, and a dealer from whom I’d bought a few items suggested I visit his home, where he said he had thousands of collectible items for sale. I made the visit, and found a home full of all manner of second-hand and vintage goods in cabinets, on shelves and in heaps on the floors of rooms. It was a bit daunting, trying to search through this extraordinary accumulation of material, and after some hours of doing my best I presented the vendor with a small heap of items, asking him to advise me the price. This was about the point where he asked me if I wanted to buy some glass plate negatives. Up until then, I had no real interest in collecting photographs. I collected old books, magazines and paper ephemera, but photos seemed to me too big an area to enter. So I said no thanks to the negatives. The seller, however, was keen to shift these items and asked me why I didn’t want them. Well, I said, they were heavy and fragile and I frankly had no idea what I could possibly do with them.

Photos sold under the counter at barber shops?

My recollection is that the asking price dropped, and dropped again to the point where I thought: why not? The story behind the negatives – as relayed to me by the seller – was that they had come from the studio of a Sydney photographer who used to supply risque photographs for sale, under the counter, from barber shops. I’ve never been able to verify this story. I recall that barber shops to which my father took me in my childhood were well-furnished with provocative calendar art and with magazines such as PIX and Australasian Post that featured photos of ladies without much in the way of apparel. But it’s news to me that slightly naughtier material was available under the counter. Perhaps you had to know how to ask. If the story is true, it might help explain why short hair remained fashionable among Australian men for so many years. Wife: “Where are you going, dear?” Husband: “Just off for a haircut, my sweet.” Wife: “That’s your third haircut this week.”

Anyway, I brought these boxes of negs home and, after Sylvia and I had a good look at them, I put them away in a cupboard. Months later I saw them sitting there and wondered how, if one was so inclined, could an image be created from them. Also, were they valuable, and how should they be stored? I did a search on the internet and, instead of finding the answers to my questions, found some current eBay auctions offering glass plate negatives for sale. Two auctions, in fact, with a total of 20 kilograms of negatives – glass and film – for sale. And the seller responsible for both auctions was in my home town of Newcastle, NSW. For some reason I still can’t fathom I contacted the seller and asked if I could inspect the items before bidding. The answer was yes, so I went and took a look. I couldn’t make head nor tail of most of the material, packed as it was tightly in old shoe boxes, but the glass plates were enough to interest me. They were mostly Newcastle scenes, very early, showing sailing ships and various other fascinating subjects around the area.

I bid, and bid again, eventually winning both lots – and paying more than I ever imagined I would pay for a bunch of old photographic negatives. These negatives (all 4500 of them) turned out to be far more interesting than I could have anticipated, and once I realised that many of them had come from the lost archives of The Newcastle Herald and Newcastle Sun newspapers, I knew they had to be turned into a book.

https://www.phototimetunnel.com/ken-magor-fireman-transport-enthusiast-and-compulsive-collectorYou can read more about that story here, but suffice to say, that’s how a bunch of old nudes led to Newcastle, The Missing Years and all the books we have published since.

No girls, people with disabilities or sons of miners need apply: bad old days of banking in NSW

Get the latest product/photo book updates and receive our regular newletters.
Close Menu

Have you taken great photos of places and people in Newcastle and the Hunter between New Year’s Eve 1999 and this year, 2020?

Would you like us to consider publishing them in our next book?