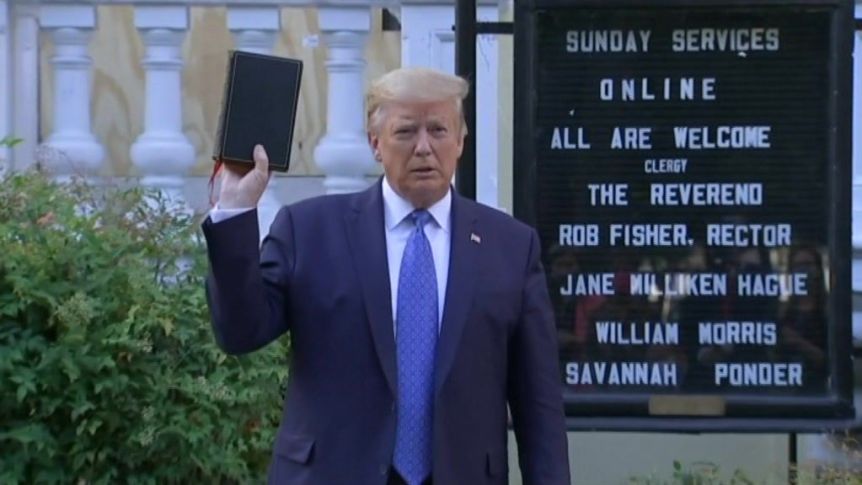 Photo from the ABC

The “prosperity gospel” first hit me between the eyes when I was about 11 years old. My grandmother, who had been a very devoted Christian all her life, was dying in hospital. We were visiting her, and so was a local pastor. What I remember about this man was that he was slickly coiffed and highly polished and that he mentioned in his conversation the big shiny new car that “God wanted him to have”.

This remark scandalised my family, especially my father, who regarded it as an outrageous travesty. The event has stayed in my memory all these years. In fact, it comes back to me more and more, as the religion of wealth-worship becomes more and more dominant and visible in the world around me.

While theology is not my speciality I have read the Bible. I’ve read the New Testament a couple of times (the Gospels often) and the Old just once all the way through – and that was a long while ago. My observation on the latter is that it is a rambling set of documents, utterly fascinating in places, beautiful, deep, moving, inspiring, bewildering, contradictory, frustrating and horrifying at times. As a young man, interested in Christianity, I read it to understand the background to Christ’s teachings. The message it left me with was that it was the back-story of a tradition among the Jewish people that they alone were chosen by God. And when I re-read the book of Joshua – after my children asked me to explain the meaning of an old spiritual I was singing around the house – the impact of the exclusivity of this message struck me even more strongly than before. Joshua is a horrific book, in my opinion: brutal and savage. It played like a movie in my head as I read it, with villainous priests playing tribal leaders like chess pieces to deploy the pawns of their people as terrible weapons against the innocent populations of towns whose wealth they coveted. But please don’t take my word for it. Read it yourself.

My limited understanding of Christianity had its roots in Sunday school lessons, in which greatly condensed and sugar-coated outlines of selected Old Testament stories were used to portray the power of God. Jesus appeared as the handsome, all-compassionate bringer of the New Testament, a new deal from the same God, but based on different and simpler principles and somehow widened to include – potentially – all people and not just the Jews. It was a simplistic view, to be sure.

But over the years, as I grew and my view of the world matured, I read the Gospels for myself, and have done so every few years in the expectation – usually realised – that some new aspect will emerge.

The thing that stands out to me as unique in the teachings of Jesus is the message that the world can be a better place if we treat each other properly. Again and again he urges people to put themselves last and others first. When the Devil, at the outset, tries to tempt him with wealth and power Jesus turns his back on him. It’s all about sacrifice in the name of an ultimate higher good. Self-sacrifice. Putting the needs of others first. I’m not saying the Gospels aren’t peppered with bits and pieces that are problematic. Jesus is not a feminist, for example.

The Gospels, it seems to me, contain a message of humility. You don’t pray noisily to attract attention and applause. It’s about practicality and intent. If you’re poor, and you give something of the little you own to help others then you have done a better thing than somebody who is hugely rich and who gives ten times as much as you. It’s about not striving to accumulate material wealth and instead striving to ensure that everybody is cared for.

But what I find interesting about many of the interpretations of the Christian message that I have encountered in the day-to-day world is that they don’t focus very much at all on these things. Instead, they focus on heaven and personal salvation. They promise a special place, with comfort and gratification in a life beyond this one. And in what I see as a perverse extension of this promise of good things in the beyond, the churches of the prosperity gospel tell their followers that the accumulation of wealth is actually a good thing, since it is a sign of blessedness. To my mind, there is no possible way this can stand alongside the teachings of Jesus as I read them in the Gospels.

High among Christian teachings is that sins are forgiven. This strikes me as important, since it offers people who are attracted to the message of Jesus but are hindered by a guilty conscience a way to move forward, leaving their past misdeeds behind. But again, a perverse extension of this idea suggests that it’s OK to keep behaving wrongly as long as you acknowledge it and ask for forgiveness.

Turning the other cheek

Jesus taught that violence should be met with non-violence, to the extent of “turning the other cheek” to the man who strikes you in the face. This teaching is practically absent, it seems to me, from the doctrines of the megachurches and prosperity gospel cults that persist in labelling themselves as “Christian”. Instead, they often tacitly endorse violence in the policies of the governments they choose to support.

As a matter of fact, it often occurs to me that if the same Devil who is said to have tempted Jesus in the wilderness was invited to design his own religion, he could hardly do better than some of the allegedly Christian churches, which adopt the perfect camouflage of lip-service to Jesus while encouraging and condoning behaviours and attitudes that I believe Jesus would have deplored.

Which brings me to the support that some Christians offer the current president of the United States of America, Donald Trump. Here is a man who, by any moral or ethical measure, is bad. His business dealings have been bad. His personal life has been bad. He lies compulsively. There is no point going on, since the matter is beyond doubt. Donald Trump is a bad person. As Jesus said, you can know the tree by the fruit it produces. If Trump is the fruit, the tree cannot possibly be a good one. If Trump is the tree, its fruit can only be poison. Either way, I can’t possibly imagine the Jesus of the Gospels offering a word of praise to a man like Trump.

And yet I have friends, who are genuinely good Christians by many measures, who do speak in favour of Trump. It seems that they subscribe to the theory that the stories of his misdeeds may be distortions presented by a biased media. And it also seems that their ingrained and almost instinctive opposition to things like abortion and homosexuality, and their vague sense that Trump is somehow a buffer against values that run counter to their beliefs – despite his own shortcomings – lead them to support him.

What would Jesus say about it?

This makes me sad beyond words. I wonder what would my own idealised Jesus (because aren’t all of our Jesuses idealised?) say about the presidential tussle in the US in 2020?

Frankly, the forces that run America and the world are not good. Whether they are represented by the figurehead of Trump or of Biden, their essential character is unchanged. Trump is worse than Biden because of his conscious harnessing of hate and division, but this is a trend being encouraged across many levels and not only by Trump.

I don’t think Jesus would back either candidate, given that ultimately both stand for the rule of the rich and the perpetuation of violence and exploitation.

I think Jesus would say that, if enough people followed his advice then perhaps the tyranny of money could one day be defeated. I think he would tell people to look after each other. He would tell them to use their resources to make each other happy, to turn away from violence, to renounce weapons and to realise that the worship of material wealth is evil, in no matter what form it is presented.

Coal pile to the moon