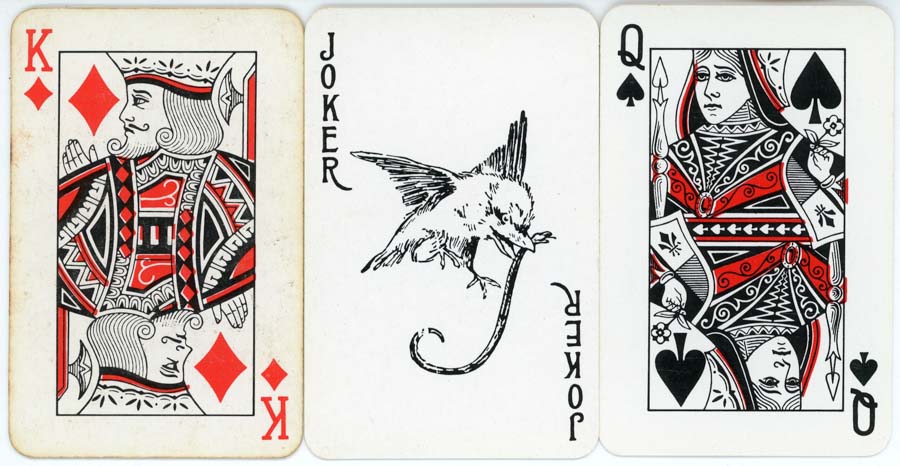 Has life dealt you a bad hand? But do you still manage to come up trumps most of the time?

Or, more to my point, have you ever noticed how many playing card expressions have made it into our regular language?

After a long period away from card games (I’m a lousy player, actually – can’t keep a poker face), I was recently induced to play a few hands of euchre, and my son taught me a new game called cambio.

One thing I liked about this game was that it alerted me to the fact that the king of diamonds has only one eye showing. In this game he is called the “one-eyed king” and worth zero points – a good thing in this case, as it happens. Naturally, you might think, since we all know that in the country of the blind, the one-eyed man is king.

Where the one-eyed man is king

This little revelation set me off, and as my mind inevitably wandered instead of paying attention to the all-important progress of the games, it drifted into the realisation that our language is loaded with card-game terminology.

Not surprising, really. People have been mucking about with “the Devil’s picture books” for thousands of years, both for divining future events and for playing games of chance. Countless games using cards have been invented, all with their own rules (often extremely variable) and their own terminologies. I’ve never learned to play many card games. Euchre and 500 are easy enough, and I like Rickety Kate (or hearts as some know it) but poker, bridge, canasta and the like are beyond me. Which is a shame I guess since most of the card game terminology in our common language seems to come from poker or similar gambling games. That makes sense if you think about it: in gambling games the stakes can be high. With something to win or lose we tend to be more focused, and of course playing these games makes us acutely aware of the role of luck, and inevitably makes some of us start to look at cards as something of a metaphor for life. Or a whole library of metaphors, perhaps.

Not playing with a full deck

Do you know people who aren’t playing with a full deck? Sad for them that they are missing something, but then again, we all have to play with the cards we’ve been dealt, right?

And yet, even those of us most well-endowed with good fortune still experience times when we can’t seem to take a trick. Or when, just as we are about to seal some deal we are unexpectedly trumped.

On the other hand (haha) we all know people who somehow always seem to have an ace up their sleeve when it comes time to lay all the cards on the table. In my experience these are the same people who tend to keep their cards close to their chest, so you never want to call their bluff.

I know people I’d characterise as wild cards. They tend to be the jokers in the deck, who disrupt the logical flow of things whenever they turn up, refusing to follow suit like everybody else.

With so much to learn from card games it’s hard to know which lessons are most important. Often in life it seems the deck is stacked against you. But if you play your cards right – and don’t show your hand too early – you can still come out even in the end.

What happens next in Ukraine?