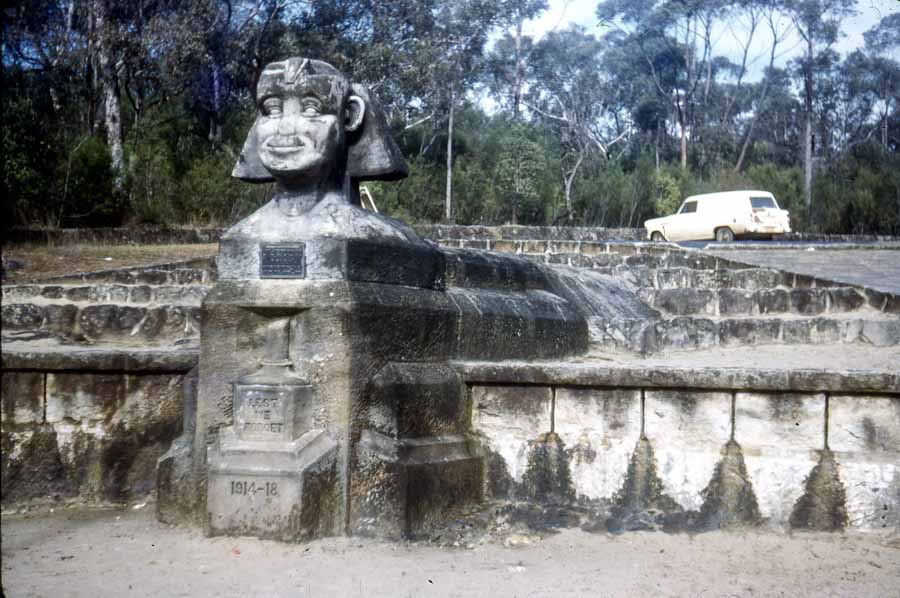 One of the strangest memorials to the fallen of The Great War in Australia is the peculiar sculpture of the Sphinx, in Ku-ring-gai Chase National Park. The sculpture, a one-eighth replica of the famous Egyptian monument, is flanked by two small carved pyramids and forms part of a wider memorial walk in the national park.

The Ku-ring-gai Sphinx was created by a dying Great War digger, William Shirley, who served in the AIF’s 13th Battalion.

Shirley was relatively elderly (40 years old) and had perhaps been unknowingly sick with tuberculosis when he enlisted in January 1916. According to his war record, he had been born in England in the 1860s and, given his grey hair and lung complaint, it seems a little surprising he was accepted as a recruit. It has been reported that he participated in the Battle of Bullecourt on April 11, 1917 and this may be true, although the common story that he was severely gassed is highly unlikely. He was hospitalised as a result of his worsening illness on April 14 and never returned to service.

Back in Australia and living at Davistown on the NSW Central Coast, his condition continued to worsen and in 1924 he was again hospitalised, this time at the Lady Davidson Hospital at Turramurra.

The story goes that a medical superintendent at the hospital suggested Shirley undertake the carving project as a form of occupational therapy – having noticed the rocky outcrop slightly resembled The Sphinx. Of course, The Sphinx had some significance to many Great War diggers who had been in camp at Egypt, although Shirley was never there himself.

It took Shirley about 18 months to carve his monument, working sporadically as his failing health allowed. The job was difficult because the stone was crumbly in places, but he finished the task and the top section of the monument was painted to help hold the stone together and protect it from erosion. Shirley died a few years later, on August 27, 1929, in Prince of Wales Hospital, Randwick.

The Sphinx was finally officially opened by the NSW Governor, Sir Philip Game, on May 3, 1931. Like its namesake in Egypt, it became a magnet for vandals, but veterans patiently repaired it each time it was attacked. The inscription on the monument reads: “To my Glorious Comrades of the AIF, by the late W. Shirley, No 5756m 13th Battalion. Died 27th August, 1929”.

An article with recent photos of the site can be found here.

The end of HMAS Australia

Travelling Through Time, dedicated to our Dads