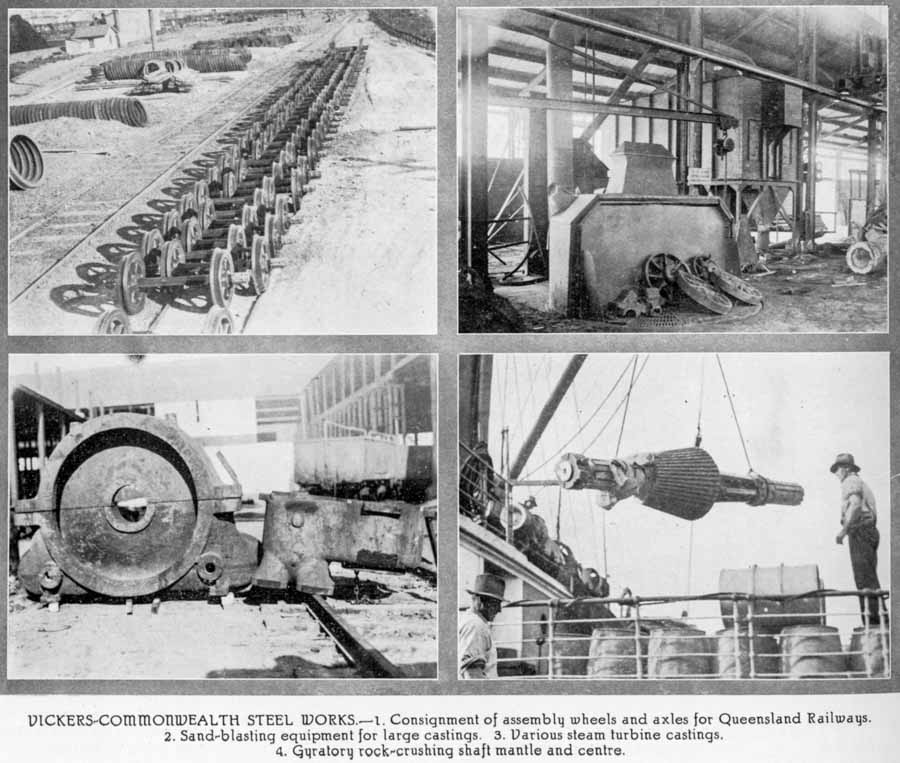 Photos from the Bank Notes article about Comsteel.

Industrial and commercial newsletters and in-house publications are a rich source of fascinating historical material, often of a type that can’t be found anywhere else. One of my favourite Australian business journals is Bank Notes, the Journal of the Commonwealth Bank of Australia. I pick up copies and bound volumes from time to time, mostly from the 1920s and 1930s, and love to comb through them for great old photos and articles about many aspects of Australian life. Mostly the articles are written by bank staff members, and the photos come from many sources.

Among the many articles I have found in Bank Notes are some by John Henry, who in 1929 was the bank’s “Industrial Purpose Accounts Officer” in Newcastle. Mr Henry made it his business to visit some of Newcastle’s bigger industrial plants and he wrote some accounts of his visits. Here follows his first article of this type, describing his visit to Vickers-Comsteel’s plant at Waratah in April 1929:

One of my duties in Newcastle Branch is to act as Industrial Purpose Accounts Officer. I am afforded the opportunity of regularly visiting most of Newcastle’s great manufacturing works, and I propose to pass on to Bank Notes’ readers at least some of the interesting information that thereby comes my way. I may thus be able to further Bank Notes’ policy of informing its readers of what is “Made in Australia” and additionally may be able to show that Newcastle is a more important industrial centre than many Australians realise.

In this, my first article, I shall deal with Vickers-Commonwealth Steel Products, Ltd.

These splendid works are situated on the main Northern Line, at Waratah, some four miles from Newcastle, and occupy over 31 acres. The works were originally established in 1917, and practically the whole of the machinery and plant installed is of Australian manufacture. Production was commenced in earnest in 1920, when the number of hands employed was about 140. Indicative of the rapid growth of the business and the quality of the output is the fact that within the brief space of six years the number of workers has been more than quadrupled, undoubted proof of such a commercial and industrial enterprise.

Our readers will no doubt be interested to know that from January, 1920, to June, 1927, this firm delivered to Commonwealth and State railways: 132,795 railway and tramway tyres, 20,294 railway and tramway axles, 19,926 pairs of assembled wheels and axles, 16,127 pairs of assembled smaller wheels on axles (for collieries, sugar mills etc.), 44,060 cast steel wheel centres. These are only a few of the many products that have left the Waratah works.

Upon visiting the works, one is immediately impressed with two prime factors. The first is the great extent of the works, and the second, the really excellent manner in which the works have been designed, and the way in which the huge plant has been installed.

I was first taken through the pattern shop, which occupies a large amount of floor space, and is equipped with the very latest machinery. The shop has a wonderful indicator method of pattern marking by the use of different colours. For instance, surfaces not to be machined are painted with colours as shown hereunder :

Surfaces to be machined,  clear varnish only.

This is only a part of the marking system, and if I were to deal fully with it, I am afraid very little space would be left for the remainder of the works.

I was next taken through the foundry, a building 600 feet overall. This foundry is equipped with two 20-ton electric overhead cranes of 60-feet span and also numerous wall and cantilever cranes, placed at advantageous positions. Here is manufactured all classes of carbon and alloy steels. The metal is delivered from a 6 ½ -ton Heroult electric furnace. Steel manufactured with this type of furnace is said to give a more refined and higher-grade product when efficiently operated than any other known process at present used for the production of steel casting. Specially designed furnaces are also employed for the scientific heat-treatment of manganese steel and the annealing of steel castings. A sand-blasting equipment is also installed for the rapid and efficient cleaning of foundry castings from adhering sand, etc., and also includes a cabinet-type machine for large castings, and a barrel tumbler machine for smaller articles.

To watch the manufacture of a railway tyre is, I think, quite fascinating, and the dexterity with which the workmen handle the task calls for the highest praise. This is a very special feature of the work at Waratah, and a few words concerning it will not be amiss. In the process of manufacture, all tyres are heated, handled, forged and rolled to a pre-determined temperature and cycle of operations. They are thoroughly and evenly worked with a resulting homogenous and even structure so as to leave the tyre entirely free from rolling, treating, and internal stresses. The metallurgical condition of the tyres is such as will give maximum hardness and strength, combined with toughness and resistance to shock and fatigue. A machine of interest is the steam hydraulic press of 2,000 tons, which is said to be the largest of its kind in the Southern Hemisphere. The power required to drive the tyre rolling mill is provided by an engine of 750 horse power. It may be mentioned here, that the largest railway tyres used in Australia are those found on the new Victorian Railways express locomotives, these are over six feet in diameter and issue from the works at Waratah.

The next building of interest to me was the axle plant. A five-ton hammer is employed for the forging, and axle turning and grinding machines are utilised for finishing the axles. The wheels are fitted with cast steel centres, of either the spoke or disc type, the tyres being secured to the wheel centres by any of the most approved methods, such as Gibson ring, riveted and double-lip, or integral fastening.

In the assembling building, which is 300 feet long and runs along the ends of the foundry and tyre plant buildings, each separate component of the wheels and axles, tyres, wheel centres and axles pass in a continuous row through their own plant, commencing at one end as raw material and emerging in the assembly shop as a machined component. The assembly-shop houses wheel-presses for forcing the wheels on the axles, gas furnaces for heating tyres for the shrinking-on process, a wheel lathe for turning the threads of the tyres, and numerous smaller machines necessary for the different types of tyre fastening. This building was, in my opinion, one of the most interesting sections of the works.

Amongst some of the notable productions from the works may be mentioned the stern frames for the steamers Fordsdale and Ferndale, both originally Commonwealth steamers of 12,000 tons. Each of these frames weighed eleven tons, and measured thirty-four feet from end to end. Also two 13-ton large cast steel gear wheels for the Queensland sugar mills, and recently the stern frames for Australia’s naval seaplane carrier; it measured twenty feet overall, and weighed 4 tons l0 cwts.

It will be seen that the enterprise of this great company has ramifications of a most comprehensive character, but also in its work acts as a great industrial bulwark to the good ship Australian Commonwealth, which, after one hundred and fifty years of navigating the stormy seas of development, is now taking an important place industrially among the continents of the world and in the markets of the Northern and Southern Hemispheres.

In conclusion I wish to particularly thank the Manager, Mr. W. Clegg, for the courtesy extended to me in affording me the opportunity of seeing through the works. Should any of our readers visit Newcastle at any future date, the same courtesy will be extended to them also.