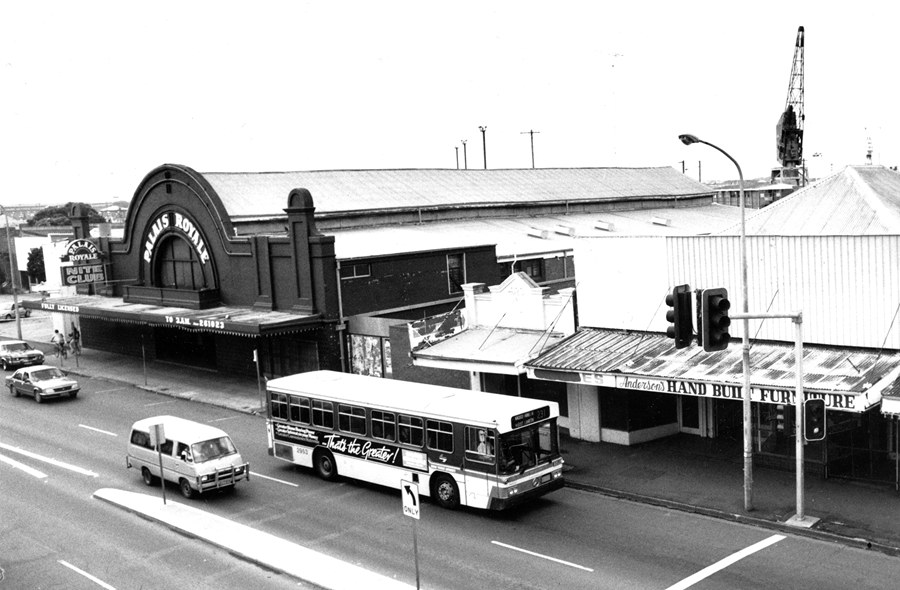 The Palais, as I remember it, in the 1980s. Norm Barney collection.

I owe my life to the Palais Royale.

That’s because my parents, like those of a substantial number of people of my vintage in Newcastle, NSW, met at that famous former music and dance venue.

In my own youth in the 1980s the Palais was, as far as I was concerned, just another venue for loud music, expensive drinks and tense nights of standing in dark, crowded corners forlornly hoping to meet the girl of my dreams while also trying to stay out of the way of aggro drunks.

It was different for my parents. In the late 1950s when they were in their teens the Palais was Newcastle’s main meeting place. The Palais dances on Friday and Saturday nights were quite simply THE events where practically everybody went.

My mum was working at the Beaurepaires tyre business at Tighes Hill at the time, and used to make her own dresses to wear to the dances, which for her were the exciting highlights of every week. She remembers dances at Hamilton too, where young jockeys and strappers were much in evidence, but the most fun was to be had at the Palais, at least three nights a week.

My dad agreed. He was working as an apprentice fitter and turner at the Stewarts and Lloyds factory and was also in the throes of compulsory national service.

He and his mates sometimes went to the more “upper-crust” dances at the Newcastle Town Hall, and occasionally even went up to Maitland’s Town Hall – with its famous sprung dance floor and highly territorial young men who were not keen on interlopers from out of town stealing dances with “their” girls. There were dances at Newcastle’s Tyrrell House too, but the Palais was the best, Dad always reckoned.

It’s hard for me to imagine how it was for my parents, since my experience of Newcastle night life was very different. In the 1980s the dress code was looser, to say the least. Alcohol was practically mandatory for everybody, other drugs were a major factor and there was never any shortage of blokes looking for a fight.

But in the late 1950s and early 1960s it wasn’t like that. My Mum, for example, could catch the bus home to Glendale alone and walk across Webb Park in Mayfield at any time of the night without ever feeling even slightly nervous or threatened. Walking along the city’s main strip you might sometimes see a one-on-one fight down an alleyway, or a drunk being sick in the gutter, but that was usually about it.

There was no alcohol in the Palais, just nonalcoholic drinks which you could swig on the mezzanine floor while you watched the dance action below. Mind you, a great many of the young men who attended – including my Dad – often heavily pre-loaded with beer at other venues before arriving at the dance. The only food my Dad recalled at the Palais was from a cart parked outside where you could buy a pie with mushy peas.

Asked for specific recollections, Dad told me that Jim Hunt’s band used to belt out the latest favourite hits, with Terry Ayliffe from Cardiff South on vocals. Big rectangular flat-blade fans hung from the Palais ceiling, pushing the air around on hot nights.

Dad said that in his day all the young lads at the Palais wore Bermuda jackets, grey trousers and if possible – iridescent socks. Except for the “bodgies” and “widgies” whose careful hairdos and stovepipe pants set them apart. While most inside the Palais danced the foxtrot, the quickstep and the Pride of Erin, the bodgies and widgies were often to be found jiving in a corner by themselves.

Dad liked the progressive barn dance, because he got to dance with a lot more girls. My Mum didn’t like that dance because too many of the young men tried to be far too familiar. Mum says she went to the Palais with her girlfriends and they’d hang around giggling and talking, waiting for boys to ask them to dance. As often as not they’d say no. My dad said getting knocked back was part of the exercise and every boy had some smart remark ready, like “I was only doing you a favour”.

Can I take you home?

“Can I take you home?” was considered the big question, and taking a girl home usually meant riding with her on the bus to her place, then going home yourself the same way. A fortunate lad might have a dad whose car he could sometimes borrow, building some prestige in the eyes of the lasses and also providing a handy mobile venue for conversation and other post-dance activities.

If all went well a couple might soon be going steady, and their nightlife might expand from the Palais to take in such popular alternative spots as Pippi’s at Speers Point where my Dad said they had a pretty good singer.

The first time my dad asked my mum for a dance at the Palais she suspected he may have been a little drunk and declined his invitation. She suggested he come back when sober and try again. He took her advice, with a different result.

Good thing too. If she’d knocked him back again I wouldn’t be here and you wouldn’t be reading this.

As for the Palais, it prospered for years before falling on hard times. A former market building, then ice-skating rink, it opened as a dance hall in 1929 and in that form became a beloved part of the city’s life. After it passed its peak the building – like many others in Newcastle around the most recent turn of the century – was profoundly neglected. A plan to redevelop the site was approved, originally with a requirement to retain the historic facade. This requirement was dropped when it was argued that the facade had managed to become structurally unsafe.

Next, developers were required to pay for an archaeological survey of the ground beneath the demolished building. The survey uncovered some sensational finds, particularly relating to the long Aboriginal occupation of the site. Unfortunately, although the survey was a legal requirement, there was not at the time any legal requirement to make the survey report public, so it was not until the construction on the site of a massive KFC outlet – reputed to be the biggest one in the Southern Hemisphere – was well underway that the public heard of the archaeological discoveries.

If you know Newcastle, you will recognise the story of the Palais as a very Novocastrian tale.

The wartime US invasion of Port Stephens