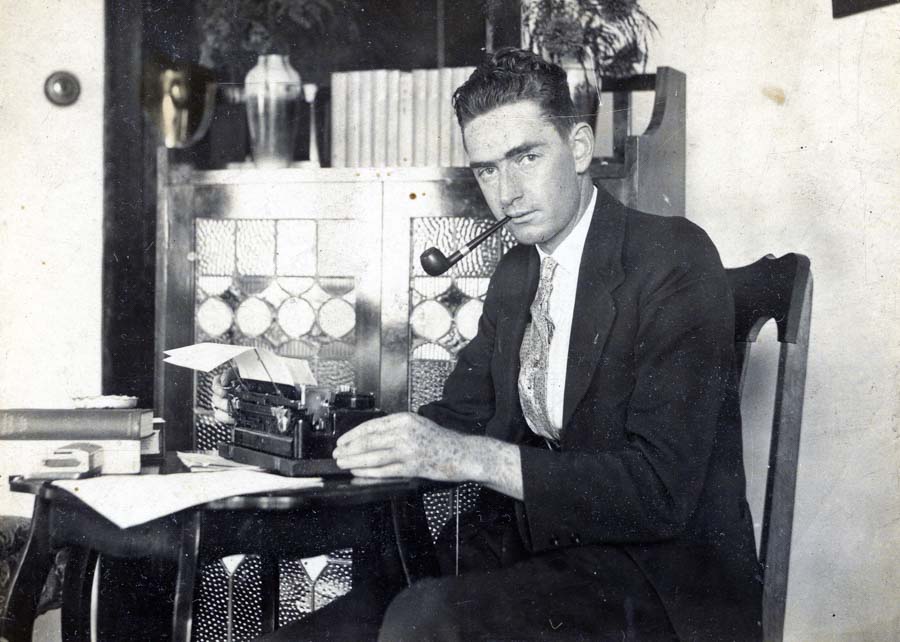 Many Australians of a certain age will remember C.K. Thompson’s books from their childhood. Thin little hardcover volumes of stories about Australian animals and birds, they were common in school libraries. It couldn’t be said that they were great literature, and even among the work of other Australian children’s authors they didn’t rate with the books of Patricia Wrightson, Nan Chauncy or Colin Thiele. But they were popular, and they may have helped inculcate an interest in nature among young readers.

Growing up in the 1960s I was aware of these books. One or two of them sat on our shelves along with the obligatory volumes of Biggles and William, and cheap editions of classics like The Coral Island and Black Beauty. But they were never really on my radar until adulthood when I found myself continually crossing the path left by their author, Newcastle journalist Charlie Thompson.

The first I really knew of Charles Kenneth Thompson was that he lived next-door to my mother when she was a child growing up in Denison Street, Mayfield. Among her handful of childhood photos were some taken by Thompson. But at that point I was only dimly aware of his name and didn’t know he was an author.

Next, when I was working as a reporter at The Newcastle Herald, I had a phone call out of the blue from a Mrs Thelma Thompson, who was living in a retirement home and wanted me to visit her. It turned out that she was the widow of Charlie Thompson, and it may have been Thelma who alerted me to the fact that my mother’s former neighbour wrote those ubiquitous books. Thelma chatted to me about many things, but the nicest part of the conversation was her description of my grandfather playing in the backyard with my mother, when she was a very small child. “He was lying on his back on the grass, holding your mother in the air and calling her ‘My Girl’,” Thelma recollected. It was a charming snippet, and I was grateful to receive it, since the entire time I knew my grandfather he was seriously stroke-affected and unable to speak. This little story let me see him in a different light. I never saw Thelma again.

Years later, while still at the newspaper, I was lucky enough to meet Charlie’s daughter, Elaine Sheehan, who very kindly shared a great deal of information about her father and his work. Still later, I met Charlie’s daughter-in-law, Margaret Thompson – widow of Charlie’s son, Stuart. I regret very much never having met Stuart. I often heard of him through mutual acquaintances who thought highly of him as a history enthusiast and very capable photographer.

Charlie Thompson, his daughter told me, was a workaholic. Always at his typewriter, churning out articles, novels, radio plays, newsletters and correspondence. In addition to being a writer, he loved to perform on stage and was a close associate of well-known Novocastrian performers such as “Uncle Rex” Sinclair and Tomahawk Joe. With the performance troupe known as “Sinclair’s Sparklers”, Charlie (who actually was known by many people as “Bill”) used to travel around the Hunter by bus, entertaining people with variety shows in community halls.

I undertand that Charlie was born in East Maitland in about 1904 and went to school at Tenambit. Some autobiographical jottings describe growing up in the rough-and-tumble of semi-rural surroundings. He had literary hankerings from an early age and did his best to promote himself and his work wherever he saw an opportunity. A “blurb” – probably written by Charlie himself – appeared in a 1931 issue of a periodical named Movie Pictorial, giving the following information about “that versatile literary man, C.K. Thompson, who is recognized as somebody in the Australian world of letters”:

For some years he was employed on the advertising staff of the “Morning Herald” in Newcastle and Sydney, and in 1925 joined the literary staff of the “Newcastle Sun” (NSW). In 1926 he was made Maitland branch manager of that paper, and later on became police court reporter in Newcastle. It was here that he gained his wide knowledge of police and court work, knowledge which he used to great advantage in his books. He has the somewhat unique experience of having “sat out cases in every courthouse in the Newcastle-Maitland-South Maitland coalfields and northern districts. The result was his first book, published in 1929 — “When the Court Smiled”. His first burst into print was a few months prior to this, when his book, “The Tram Ticket Mystery” appeared as a serial in the Sydney “Daily Telegraph Pictorial,” and was acclaimed as a first-class murder mystery.

Forging ahead all the time, Mr Thompson wrote, and had published, the following works: Books, “The Tram Ticket Mystery” and “When the Ghost Walked” (1930), “The Mystery Lady” (1930). Serials, “Breed of the Anzacs” (1928), “King of the Ranges” (1929), “The Third Man” (1929), “Jonah: Ghost Hunter” (1930), “Let’s Be Kids Again” (1931), “Stroke of Judgment” (1931). In addition to fiction he finds time to write short stories and plays, humorous sketches, and stage items. He is an amateur, actor of note, being right hand man to the producer of “Sinclair’s Sparklers” (Mr Rex Sinclair). Space is too limited to record all his activities: sufficient to say that in public life, in his own district of Waratah-Mayfield, he is well known, and is closely identified with everything of note which is on the move. Mr Thompson is married, and lives at 20 Denison Street, Mayfield, and has a family of one. His hobbies include gardening, amateur acting, and amateur movie making. Mr Thompson was the founder and editor of “The Scandaliser,” the official organ of the 35th Battalion (Newcastle’s Own Regiment). He also edits “Sparks,” an amateur theatrical magazine run by “Sinclair’s Sparklers”.

Charlie also churned out novellas for Australian pulp publishers in the 1940s, and he had a bewildering number of pen-names including “Denison Street”, “CKT”, “Charles Kay”, “Stuart Burton”, “T. Egan” and “SB”. As a key contributor of crime stories to the magazine Famous Detective, published in Sydney by Frank Johnson Press, he sometimes provided almost every article in a given issue, all under different names.

Most notably, it was in Famous Detective that Thompson published the compendium of cases recorded by former Victorian detective Alfred Stephen Burvett.

In later years at The Newcastle Sun he worked as a sub-editor.

As an author, Thompson was a friendly acquaintance of well-known writers of the 1940s and 1950s, including Ion Idriess, Frank Clune and Will Lawson – one of whose works, Old Bob’s Birds, Thompson published under his own name. Details of his agreement with Lawson were recorded in correspondence retained by his daughter.

This correspondence gives some insights into the Australian book-publishing scene in the tough years of the 1930s and 1940s. Frank Johnson, for example, was relatively eager to accept material but a notoriously slow payer and poor correspondent. (One relative of an author told me that Johnson’s nickname among writers was “Greasy”.) Angus and Robertson were considered top-shelf, but hard to sell to. Thompson struck pay-dirt with Dymocks, who treated him very fairly and made a great success of the animal stories – starting with King of Ranges, which Frank Johnson rejected. Interestingly, Dymocks had turned down Old Bob’s Birds when Will Lawson submitted it to them, but accepted it when they believed it Thompson was the author.

Thompson’s animal stories were very well regarded in their day. A review in The Melbourne Age wrote of Thompson that: “He brings to his work a sound knowledge of the Australian bushland and a keen desire to inculcate in children a protective attitude towards the animals and birds of their country.”